Previously, I have pointed out how the Stop the War Coalition uses material from an active antisemite, Alison Weir (not the historian).

Also, they published a poem, which willingly referenced Gordon Duff, the proprietor of a hardcore antsemitic site, Veterans Today.

At the time I had thought that it was only an unfortunate mistake by the author, but now the train of thinking is apparent. Another tract from Heathcote Williams has appeared.

In a demented sermon masking itself as a poem Churchill is accused of provoking Hitler and starting World War II:

Antifascists will remember how David Irving took a similar tack many years back. 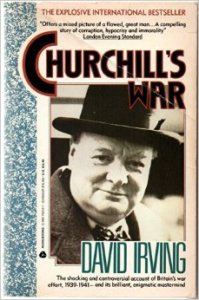 Had I not seen such thinking and arguments before on the Extreme Right I might have been surprised, but shockingly Williams is not a neo-Nazi or an active antisemite.

Instead Williams is an old Etonian and apparently on the fringes of the British Far Left.

I was curious if Williams other works would reveal something of his thinking. I didn’t have to go far.

Williams has written a long, interminable, piece on the Middle East. It drips with contempt for Jews.

I was mistaken before to think that his use of material from an active antisemite was an aberration, an error, rather it is more a way of thinking amongst the Stop the War Coalition and its groupies.

So the desire to blame everyone, but Hitler and the Nazis for World War II is not confined to the Extreme Right. It has its advocates on the British Far Left.

That is why we must not forget history or allow such foul revisionist thinking to go unchallenged, whenever and wherever it comes from.