Faith Matters, an NGO which works to reduce extremism, intra-faith tensions and promotes interfaith dialogues, published an interesting report on the EDL in 2010.

Download the English Defence League: Challenging Our Country and Our Values of Social Inclusion, Fairness and Equality, [as a PDF].

Apparently, they will be releasing another report shortly.

Meanwhile, keep up with them by following Faith Matters and Tell MAMA on Twitter.

Racism is on the rise in British, again, and TellMamaUK is a great initiative to help combat it.

The graphics below, which covers only a small period of time, shows the sad necessity of Tell MAMA (Measuring Anti-Muslim Attacks): 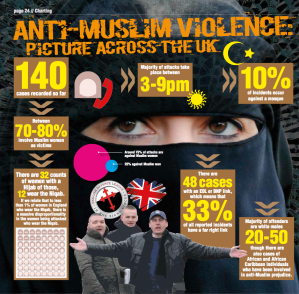 The majority of Muslims being physically attacked, harassed or intimidated because of their faith are women, according to interim results from the UK’s first ever ‘official’ anti-Muslim violence helpline.

Victims have included children as well as pensioners in their 80s. Even Baroness Warsi, the co-chairman of the Conservative Party, and socialite and journalist Jemima Khan, have been subject to online threats picked up and reported to the police by the TELL MAMA (Measuring Anti-Muslim Attacks) campaign.

TELL MAMA, which was set up with Government backing at the end of February by interfaith organisation Faith Matters, has chronicled over 140 cases to date and led to the arrests and charging of three far-right English Defence League (EDL) sympathisers, with more cases and arrests likely in the coming months. Approximately 75% of the cases involve female victims, with far-right British National Party (BNP) or EDL sympathisers linked to one-third (33%) of all incidents.

The helpline records a disturbing picture of low-level anti-Muslim harassment: incidents in the workplace, in the street, between neighbours and particularly online, which may not always hit the headlines but have a devastating effect on peoples’ lives.