I can not even begin to imagine what it is like to be incarcerated, without trial, at Guantánamo Bay. 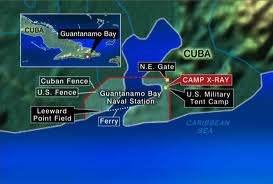 I am sure readers have read the many accounts of innocent individuals scooped up by questionable security services and dumped in Gitmo, but this account is even more troubling, Salon reports:

“Mohamedou Ould Slahi began to tell his story in 2005. Over the course of several months, the Guantánamo prisoner handwrote his memoir, recounting what he calls his “endless world tour” of detention and interrogation. He wrote in English, a language he mastered in prison. His handwriting is relaxed but neat, his narrative, even riddled with redactions, vivid and captivating. In telling his story he tried, as he wrote, “to be as fair as possible to the U.S. government, to my brothers, and to myself.” He finished his 466-page draft in early 2006. For the next six years, the U.S. government held the manuscript as a classified secret. ”

“Chess is a game of strategy, art, and mathematics. It takes deep thinking, and there is no luck involved. You get rewarded or punished for your actions, your moves. [ ? ? ? ? ?] brought me a chessboard so I could play against myself. When the guards noticed my chessboard, they wanted to play me. When they started to play me, they always won. The strongest among the guards was [ ? ? ? ? ?]. He taught me how to control the center. Moreover, [ ? ? ? ? ?] brought me some literature, which helped decidedly in honing my skills. After that the guards had no chance to defeat me.
…
“Now you understand how chess must be played,” he commented. I knew [ ? ? ? ? ?] had issues dealing with defeat, thus I didn’t enjoy playing him because I didn’t feel comfortable practicing my newly acquired knowledge. [ ? ? ? ? ?] believes there are two kinds of people, white Americans and the rest of the world. White Americans are smart and better than anybody. I always tried to explain things to him by saying, for instance, “If I were you … or … If you were me,” but he got angry and said, “Don’t you ever dare compare me with you or compare any American with you.” I was shocked then, but I did as he said. After all, I didn’t have to compare myself with anybody. [ ? ? ? ? ?] hates the rest of the world, especially the Arabs, Jews, French, Cubans, and others. The only other country he mentioned positively was England.

After one game of chess with him, he flipped the board.

“Fuck your nigger chess, this is Jewish chess!” he said.

“Do you have something against black people?” I asked.

Guantánamo Bay must be closed.