Witness the sense of entitlement that Westminster MPs had, they genuinely could not understand the issue of their excessive expenses claims. These MPs lacked any insight into their own conduct and how others saw them.

So it is with David Ward MP.

A few weeks ago, Ward made sweeping generalisations about “the Jews”, compounded offence with an insincere apology and only then begrudgingly when threatened by the LibDem chief whip.

Now Ward continues on his path of dog whistles, paranoia and is devoid of any self examination.

After his crass behaviour, an unapologetic interview at the Guardian was meant to clear the air and help him, but Ward made things worse:

“There is a huge operation out there, a machine almost, which is designed to protect the state of Israel from criticism. And that comes into play very, very quickly and focuses intensely on anyone who’s seen to criticise the state of Israel.”

Later on, Ward had the temerity to email the Jewish News and asked the most facile of questions. 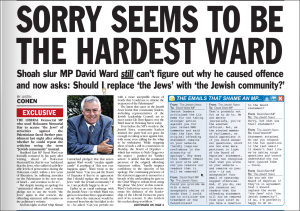 There are being a number of intelligent responses to David Ward’s idiocy, but I can’t help thinking that nothing will sink in, nevertheless, Rabbi Neil Janes makes the effort:

“Instead of leaping to the conclusion that you are being silenced by a powerful lobby or that you were ‘just’ speaking truth to evil, I advise you to begin to demonstrate your understanding and empathy for all peoples – by the way, it is not just Jews and Palestinians who live in Israel, the West Bank and Gaza. If you had done that and then voiced your concerns in a measured way, not on Holocaust Memorial Day, you may have found the reaction would have been different. “

“Unto Ward, therefore, the prize for reconfirming so very quickly my hypothesis of yesterday that there’s a smelly fish theory of criticizing Israel. Some people plainly believe that it doesn’t matter what you say if you have criticisms to make of that country; even the most dodgy words should get ‘cleaned up’ by your good motives (‘when I say words it isn’t with intention of offending’). Unfortunately, there’s this damned machine at work protecting the state of Israel from criticism. “

The smelly fish theory is an enjoyable read.

“It is telling too that Ward remains utterly oblivious as to why his use of the collective term “the Jews” might cause offence, given both the historic and contemporary use of that term. “Why are you trying to make this so difficult?” he exclaims at Edemariam. “I’m clearly not referring to those I’m not referring to. I mean we refer to, ‘Oh, you know what the Americans are like’ [but we don’t mean] every single American.” Later, he claims stating “the Jews” is equivalent to “the Liberal Democrats”, ignorant of the fact while one is a political party organised on principal whose membership is optional, the other, evidently, is not.“

Not unsurprisingly Ward does have his defenders. The LRB rushes to the rescue. However, in doing so, the author has to change the meaning of Ward’s words to sanitise them, sloppy.

Much has been made of Ward as a victim, rather than a cynical politician. The LibDems might reprimand him, but that gentle slap on the wrist won’t change him one bit.

Not forgetting that Ward is quite popular on the Extreme Right. David Duke is one of his admirers.

Duke is a one-time neo-Nazi and ex-Grand Wizard of the Ku Klux Klan. The SPLC explains his background:

“Also in 1970, Duke founded the White Youth Alliance, a student group affiliated with the National Socialist White People’s Party (NSWPP), a hard-line descendant of Rockwell’s American Nazi Party. As a campus activist, he attempted to recruit his peers by tapping into the radical sentiments of the times. “Nazis also want to smash the system,” he told his fellow students.

After a year visiting his father in Laos, Duke returned to Louisiana and graduated in 1974, whereupon he founded the Knights of the Klu Klux Klan (KKKK).

As national leader of the new organization, Duke achieved a remarkable shift in Klan targeting — from blacks to Jews — by recruiting NSWPP members such as Alabama hardliner Don Black. This effective Nazification of the Klan became apparent in the obsession with Jews found in the KKKK organ Crusader, which began to share bylines with the NSWPP’s White Power. In 1975, California NSWPP member Tom Metzger became Duke’s California leader. “

Can’t think what Ward and Duke have in common.

Update 1: Apparently, David Ward is emphasising how Noam Chomsky supports him. If the honourable member for Bradford East had done his research he might find that is a bit of a poisoned chalice:

“Distinguished professor of linguistics and philosopher, Dr Avram Noam Chomsky, has today defended comments by David Ward MP about the treatment of Palestinians by Israel. He has dismissed claims that Mr Ward’s comments are anti-Semitic.”

Chomsky is well-known for his opinions and lack of judgement.

In fact, he will comment on almost anything, irrespective of the facts or sense of the matter. In a similar situation many years ago, Chomsky supported a decidedly dubious individual and wouldn’t admit his mistake when it was pointed out.

Chomsky characterised the well-known Holocaust denier, Robert Faurisson, as “a relatively apolitical liberal of some sort”.

Faurisson was, of course, nothing of the sort. He’s a well known associate of neo-Nazis

Chomsky defended himself, invoking Voltaire and no end of nonsense.

“The simple truth, Noam Chomsky, is that you were unable to abide by the ethical maxim that you had imposed.

Chomsky’s judgements in the 1980s were often proven to be wrong, silly or plain stupid. In the intervening years Chomsky seems to have learnt very little and in that, he is in good company when it comes to David Ward, MP.

Update 2: David Ward even gets a mention at the ill-name Institute for Historical Review. The IHR have been in the business of vindicating Hitler, the Nazis and denying the Holocaust for years

Ward’s supposed predicament is use by Gilad Atzmon to regurgitate his familiar racism. It is just below a piece by Paul Eisen entitled “Why I Call Myself a Holocaust Denier” and features in a page replete with David Irving’s nauseating material, including a homage “Hitler’s Place in History” co-authored with the neo-Nazi, Mark Weber.

Still trying to work out, what is the commonality here?

“Better to keep your mouth shut and appear stupid than to open it and remove all doubt.”

Alas Ward couldn’t and the Algemeiner points out:

“In the meantime, over the weekend Ward Tweeted that he had received 5,000 emails supporting him, but just “100 (pretty vile) against.”

Asked by an interlocutor whether Israel’s actions are “because of the holocaust? Is that what you’re trying to say?” Ward responded: “I don’t know….but it is important to ask the question and we cannot allow the horror of the Holocaust to stop us asking.”

Ward has been condemned in every corner of British politics for his remarks, including by Respect’s George Galloway, himself a devoted critic of Israel.”

Update 4: Similar points are made at the JC, David Ward digs deeper, backed by Chomsky.

“But free speech never (or should never) exempts someone from responsibility for facing the social repercussions of their speech.

If someone says, “All {Insert group} are {insert horrible description}”, free speech doesn’t forbid either people demonstrating what is wrong with the statement or people considering the person who made the statement not necessarily being a fit and proper person in certain circumstances. ” [My emphasis.]

Update 6: According to the Bradford Telegraph and Argus:

“And he revealed his frustration about the long-running row, when he said he had discussed it with the MP “until I am blue in the face”.
…
Mr Ward also made a fresh criticism of the Lib Dem leadership, saying: “The chief whip believes I am courting the Muslim vote. But that’s damned insulting both to Muslims and the white community I represent in Bradford, who regularly come up to me and offer their support.”

That suggestion is embarrassing for Mr Clegg, who insists Mr Ward is not prevented from making honestly-held criticisms of Israel and the suffering of the Palestinians. The deputy prime minister said, yesterday: “I have stressed that to David Ward – until I am blue in the face.”