I have been away and missed the outburst of anti-Jewish racism from the Free Gaza movement via Greta Berlin.

“This last theory of his was largely forgotten until last week, when Greta Berlin, a co-founder of the Free Gaza Movement, published a message on the group’s Twitter feed: “Zionists operated the concentration camps and helped murder millions of innocent Jews.” It contained a link to a video of Mullins delivering his message.

The Free Gaza group, the leading edge of the international campaign to delegitimize Israel and bring about its end as the national home of the Jewish people, has always argued that it isn’t anti-Semitic, and is merely trying to break Israel’s blockade of the Gaza Strip. The group came to public attention in May 2010, when it organized a flotilla of ships to attempt to break the blockade. Israeli commandos boarded the ships and were set upon by passengers wielding pipes and knives. In a terrible overreaction, they responded by opening fire, killing nine. The incident has nearly destroyed Turkish-Israeli relations, and helped make the flotilla cause popular across the Middle East and Europe.
…
Then Berlin’s Twitter message was discovered last week. Berlin said she posted the video without watching it, and that the message was meant for a private Facebook group. Her critics pointed out that the private sharing of Nazi propaganda doesn’t fall into a different moral category than the public sharing of Nazi propaganda, and so she then argued the message was meant to be part of a broader discussion about the nature of hateful propaganda. Free Gaza has officially disowned the post and taken it down.
But this isn’t Berlin’s first dalliance with purveyors of anti-Semitism. She has also endorsed the work of an ex-Israeli Holocaust revisionist (yes, such a person exists) named Gilad Atzmon, author of “The Wandering Who?” Atzmon has argued, among other things, that it was the Jews who persecuted Hitler, and that Jews who commemorate the Holocaust are followers of the “the most sinister religion known to man.”

Avi Mayer pours over the details at storify:

“The Free Gaza Movement is the key actor behind the successive flotillas that have sought to violate the maritime closure around Gaza in support of Hamas. It is chaired by Huwaida Arraf, who also heads the International Solidarity Movement (and has endorsed the use of violence against Israel), and its Board of Advisors includes such luminaries as Naomi Klein, Peter Hansen, and Jenny Tonge. It has been endorsed by a range of organizations and individuals, including Desmond Tutu, Jewish Voice for Peace, Code Pink, the Palestine Red Crescent Society, the Rachel Corrie Foundation, George Galloway, and Neturei Karta International.

On Sunday, September 30, a disturbing tweet was posted by their official account (click to expand the image):
…
The tweet read, “Zionists operated the concentration camps and helped murder millions of innocent Jews,” and contained a link. The link led to this horrifying video:
“

Later on Greta Berlin tried out various excuses but they did not tally with the evidence:

“In a fascinating twist of irony, the individual who put Greta’s claim to the test was none other than Ali Abunimah, the editor of the viciously anti-Israel website Electronic Intifada. In a blog post published on Saturday, Abunimah stated that Berlin’s claim about a discussion of propaganda and racism was plainly false.
…
When the video was posted on 28 September it was neither preceded nor followed by any interactions that would fit the description that it “was shared with a group of people who were discussing propaganda and racism, and this link was an example of the terrible propaganda that could be spewed on websites.” This context does not exist. “

“Now Derfner and Berlin claim that there was no such ongoing discussion of hate propaganda. So why was Berlin claiming the offensive tweet was part of a discussion which she now claims doesn’t exist? Why didn’t she just say that the discussion didn’t exist?

And if no such discussion exists, hence she is unable to publish it or provide access to it, then how can Berlin claim that her tweet was in the context of the nonexistent discussion which she cannot publish because it does not exist?

At this point Greta Berlin’s defense has become incomprehensible nonsense. Either the discussion exists, in which case she could publish it, or the discussion doesn’t exist and so cannot be the context for her offensive tweet.

Beck promoted the work of an anti-Semitic 9-11 truther.

“Eustace Mullins (March 9, 1923 – February 2, 2010) was an author from Virginia often cited as source material by authors of anti-New World Order books, such as Pat Robertson. Mullins is also cited by “researchers” in the field as a prolific writer of anti-Semitic literature. Authors like Robertson[1], Gary Kah[2], Bo Gritz[3], Texe Marrs, and Glenn Beck[4] have cited Mullins as a source without also mentioning that Mullins has written tracts with titles like “Adolf Hitler: An Appreciation” and “Jewish Television: Sick Sick Sick”, making citing Mullins, to put it mildly, rather suspect. He was, until his death in February 2010, a contributing editor to the Barnes Review, a Holocaust denial magazine.”

Update 1: We shouldn’t forget that this is not an isolated incident. There are no end of tieups between supporters of the Palestinian’s cause in the West and the Extreme Right.

In 2009 Adam Holland reminded us of how the supposed left-wing, Cynthia McKinney, was found in the company of Lady Renouf and other neofascist friends. Their point of unity was a shared loathing of Jews.

Update 2: The SPLC covered it too:

Update 3: Ms. Berlin seems to be going for a “when in a hole stop digging” award:

“The posting contained a link to a video of a speech given by conspiracy theorist Eustace Mullins, who claimed an alliance existed between Adolf Hitler and Jewish nationalists. It was soon removed from the account, but not before members of the media took notice. Berlin issued a wholesale denial of any support for those views, claiming she posted the video to be discussed by a small group of associates and instead, accidentally posted it to the movement’s public Twitter account.

“I did a stupid thing,” she said when the Daily News reached her in Los Angeles.

“Instead of posting a link in a small group that I belong to, a group of 37 people – I was in a hurry, I think I was on the way to a book event in London, Ont. – I hit share for this video.”

In the days since the controversy broke, Berlin said she had only fielded two direct calls from the media. For the most part, her private life remained unaffected by what she claims was an accidental oversight.

Her friends and associates have remained supportive of her, she said.

The Facebook group she was attempting to post the video to is a small group of supporters that uses it to discuss strategy for the Free Gaza Movement.

“It’s my fault for being rash and not paying attention, but I didn’t endorse the film,” she said. “I didn’t say anything about the film.” “

Update 5: The Toronto Sun too.

Update 6: Reading an informative piece at Mondoweiss we learn more about the Free Gaza Movement’s hangups:

I can’t help feeling more will come out.

Such racists tend to have a smorgasbord of irrational notions, often displaying paranoia and conspiracy ideas, etc, and a compelling desire to share their nonsense with others. 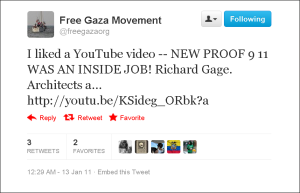 They pointed to a YouTube clip by Richard Gage, (as a public record, I will provide a link to this deranged material), entitled: NEW PROOF 9/11 WAS AN INSIDE JOB! Richard Gage. Architects and Engineers for 9/11 Truth!

I would assume he, his supporters and assorted hanger-ons believe that 9/11 was executed by Mossad, big lizardmen or aliens, etc or maybe a combination of them all?

Update 8: The Free Gaza Movement are still in denial about racism. They’ve issued a rather predictable statement. I am just awaiting for the “Some of my best friends are…” excuse.

Update 9: There is a rather weak defence of Greta Berlin at Souciant.

Firstly, the piece by Mitchell Plitnick sees events from a largely US perspective and as a consequence goes off on a very American tangent.

Secondly, it is undemanding intellectually, as it does not even try to ask any hard questions of “anti-Zionists” like Greta Berlin.

For example, why is such racist material often found in proximity to non-Jewish “anti-Zionists”?

Instead of examining the issues of racism and the Western supporters of the Palestinian’s cause, Plitnick’s argument revolve around geopolitics and are encumbered by unhelpful assumptions on the motives of others.

Had Plitnick taken the troubled to ask why is it so easy to find instances of ‘Western supporters’ proffering material from the Far and Extreme right that might have been a start, but as it is, well, I shall leave readers to make up their own minds.

I suppose in his defence, Plitnick might view this occurrence in isolation and be unaware of how neo-Nazi material and Holocaust denial playfully seeps into a movement which is supposed to be helping the Palestinians, but is doing the opposite.

Whatever the reason, I feel Plitnick should better informed himself about extremist material amongst these ‘Western supporters’ and try to understand such racism with less reference to America.

There’s a big wide world out there and racism against Jews can be found on an almost daily basis. This is the CST’s Antisemitic Incidents Report 2011 which makes depressing reading.